I've Been Clobbered by a Rooster 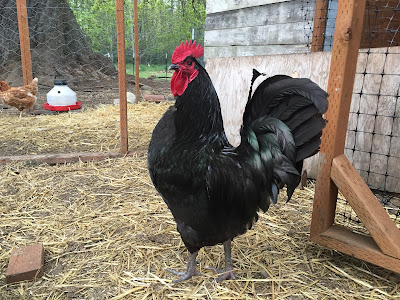 First Captain lit into my husband while he was out refreshing the chicken water.  Then after I got home from work, Captain clobbered me while I was refilling the chickens' ground oyster shell. (The chickens require calcium to produce eggs with thick, healthy shells, and oyster shell is a great way to feed them calcium.)

I usually protect myself from Captain by holding a snow shovel in front of me while I go through the coop and chicken run.  He respects the shovel.  Mind you, I've never hurt him with the shovel (or with anything else -- I just hold it there in front of me and he keeps his distance).  Unfortunately, I mistook how far away Captain was when I turned and bent down to shake some oyster shell from the bag into their bowl.  Suddenly, from out of nowhere, Captain was behind me and kicking my ass with the spurs on the backs of his legs.  He flew up into the air and dragged down his feet onto me.  I had the sensation of giant black bird flying over the top of me and all over my back.  I'm not sure how he was able to drag four long gashes through my bum and the backs of both legs with only two spurs. His spurs managed to penetrate through my flannel pajama bottoms and drew blood.

The ordeal was startling and painful.  I dropped the oyster shell and ran, then stood on the other side of the fence shaking while Captain puffed up his breast and strutted around.  Then he topped it all off by crowing, declaring his victory over his latest victim.

Our rooster is downright mean.  I'm not sure why he turned mean, as he was hand-raised, petted and loved along with the hens from the time we took him home from Coastal Farm and Ranch. About the time he started crowing, he changed. Perhaps he is this way instinctively as part of his desire to protect the hens.

He is lucky he hasn't ended up in the stew pot.  I've heard some roosters are nice and will let you pet them. Any thoughts on what we should do?

For now, I've retreated indoors for the evening -- applying peroxide and band-aides to my wounds, drinking a cup of chamomile tea to settle my nerves.