Snow Chores and Fun Around the Farm

February 10, 2019
We woke up Saturday morning and discovered the latest storm had dropped another 6 inches of snow. 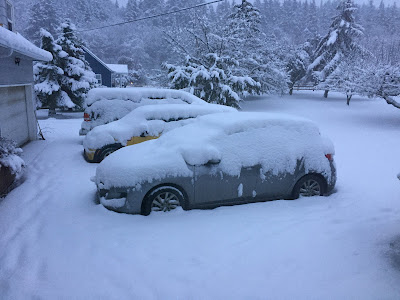 It's been a long time since our area has seen snow like this - not for at least 12 years or more. 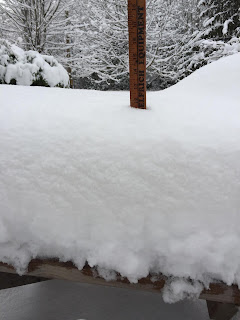 I was amazed to see we had 12 inches of snow on the picnic table. 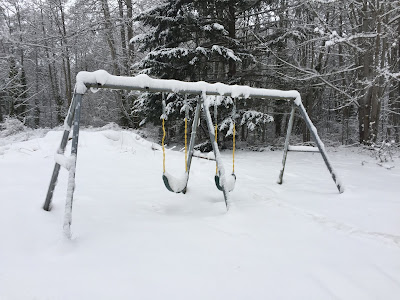 It was a beautiful winter wonderland. 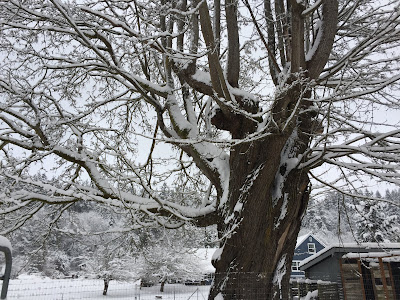 Of course, there are a few farm chores to take care of regardless of whether there is snow. The first chore of the morning is always taking care of the chickens. 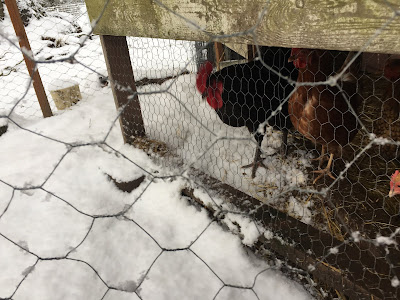 The chickens seem to be doing okay in the cold weather without much extra effort.  They don't have a heat lamp, which I feel guilty about, but I'm following advice from The Prairie Homestead which says chickens do not need (or even want) the extra heat.  This is the first year I've left them alone. Last year our three original chickens had a plastic heating pad that they could sit on.  We didn't even get the heating pad out for them this year, since it would not be big enough for all of them to sit on now that our flock has grown.

Instead, we've added more shelter for them from winds by siding more of the shed that they are in, and we've been attentive to their water. Rather than purchasing a heated water feeder, we go out several times a day to refresh their water when it's about to become frozen.

It's been a bit scary living here at times in this rambling old house, with its quirks, especially in the winter and when it snows and we feel cut off from civilization.  We were reminded of this on Saturday while filling the chicken water feeder in the laundry room washtub, we discovered that the hot water pipe in the laundry room had frozen.  The pipe comes out of the ground in the cement slab, and we really have no idea where it runs under the slab to connect to the hot water tank.  I guess the concrete wall that the pipe runs along in the laundry room got too cold that night.  We ended up putting a propane heater in the room, and after a few hours the pipe finally thawed and was okay.  We strategically left a few faucets dripping after that.  Keeping my fingers crossed that no more pipes will freeze...also knocking on some wood, too, for added measure (I do that a lot).

My neighbors have been communicating on Nextdoor and one of the threads of conversation is whether or not our neighborhood association should’ve hired a snowplow to come through. Ours would be the last area to thaw otherwise, since it is a private community. My husband decided to go ahead and plow our driveway with the tractor just in case we needed to go to the store and also so I could possibly get to the office on Monday. 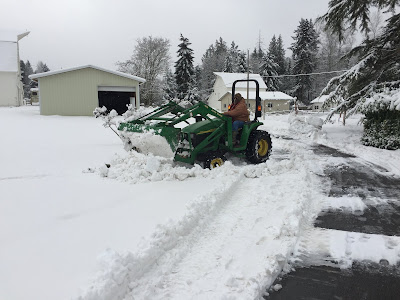 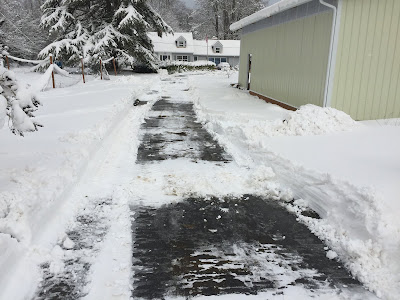 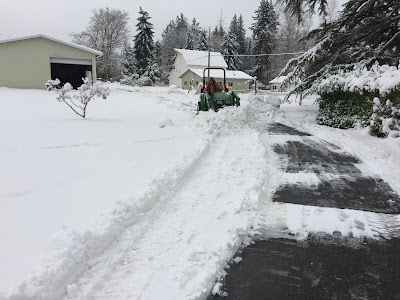 He also plowed much of the parking area in front of the community barn.  It looks pretty good  considering he used the bucket to scrape the snow away. 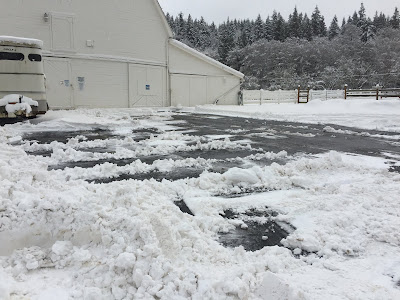 It was a beautiful day Saturday, and so we spent quite a bit of time outside in the snow.  We visited the animals in the barn.  My daughter took this great photo of Patch and Bugsy: 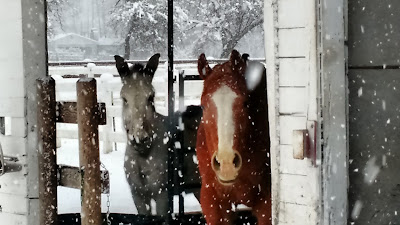 Friends then invited us to go sledding.  We hiked up the Discovery Trail a ways to a nice long hill. 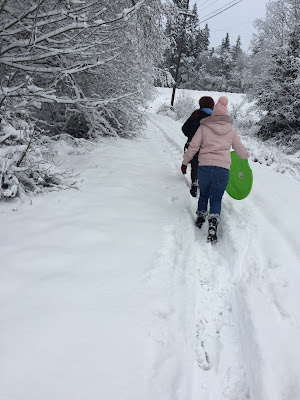 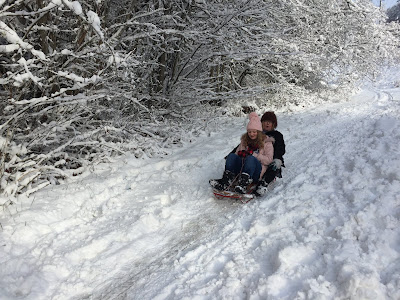 Taking turns, we had a blast racing down the hill. Swoosh! 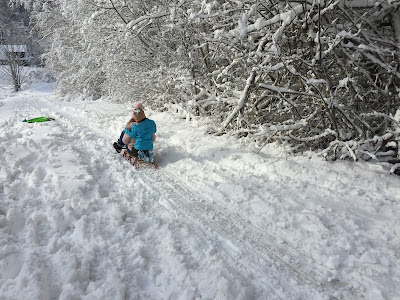 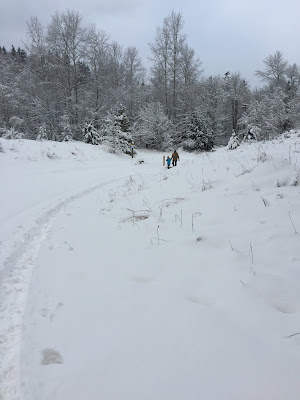 My daughter then went along with the group to another hill near the clubhouse while I headed back home to check on a science experiment I had going on in the kitchen: Sourdough bread.

I've been nursing along two jars of sourdough starter that we received at a workshop that was held at the public library.  Victoria Redhead Miller, author of From No-knead to Sourdough: A Simpler Approach to Handmade Bread, gave a talk on making and using sourdough starter, and then provided scoopfuls of her own starter to everyone.  It was a bring-your-own-jar event, and so my daughter and I each brought a jar. 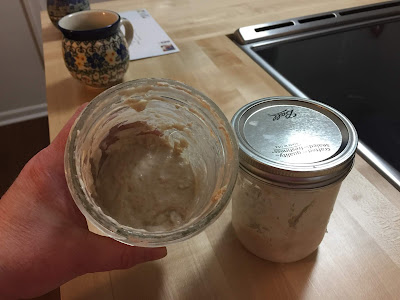 My first loaves came out very well. Here they are before their final proofing. 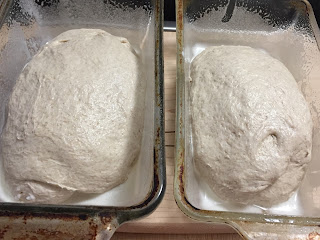 The bread, once baked, is dense and moist with a thick crust. It's a very rustic style of bread that is addictive.  I'll have to write more on how it's made in another article soon.  I ended up deviating from the author's recipe a bit, mainly to make it a little easier. One step I changed was instead of  hand-kneading the bread for 10-15 minutes, I used my stand mixer with the dough hook.  I also ended up letting the dough rise a lot longer because my house is so cold that it just took longer. And, rather than following her measurements for flour and water precisely, by my second batch I just added scoopfuls and stirred to get a consistency that looked good.  Nothing about sourdough seems to be very precise, as far as I can tell, which makes it kind of fun. 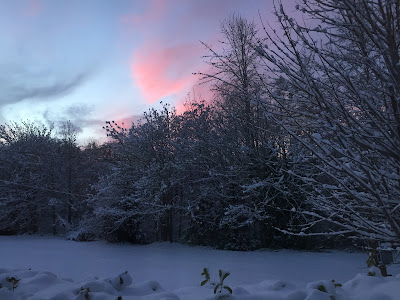 As the sun went down Saturday evening, we were treated to a serene sunset with streaks of pink and blue. 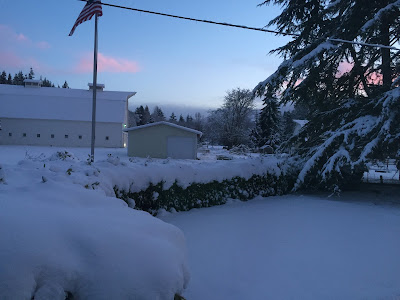