January 05, 2019
One of our neighbors was walking his Great Dane and Sheepdog off-leash along the path behind our house while our chickens were out on the property.  I had let the chickens out of their coop earlier that morning so they could enjoy free-ranging in our nearly three acres of yard.  We had just finished breakfast and as I was clearing the table I saw something large and black zoom across the window.  I realized it was the rooster. He was chasing the sheepdog away from the hens.  Being the chicken mama that I am, I ran outside in my pajamas and robe, with only my wool socks to protect my feet.  It was a cold and wet winter morning, but there I was rushing around looking to see where the chickens were.  My daughter and husband joined me and the dog owner also, all of us concerned about the welfare of the 10 chickens who were running to save their lives. 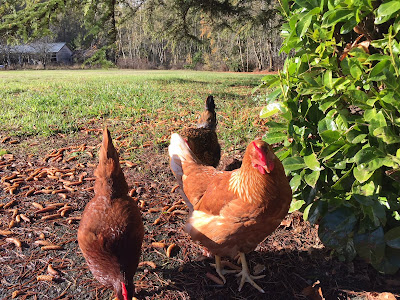 One of our hens had lost two dozen feathers in the side yard, and my heart leapt into my throat as I imagined her dead under the shrubbery.  We looked but didn't find her there.

After a half-hour of searching, we managed to recover all the chickens and guided the stragglers back to their coop.  My poor hen, Henrietta, was the one who had lost many of her back feathers.  But she was okay otherwise.  We were lucky that there was not a scratch on any of the chickens.

I found the rooster hiding behind the garbage cans.  He was huddled down there, and for a moment I thought he was dead.  The way he was huddled there, not moving, was alarming.  However, when I walked closer and talked gently to him, he looked up at me and I knew he was okay.  It took a little coaxing to get him to walk out on his own (he's a mean one; it's never a good idea to try and pick him up!) and then he went back to the coop where his girls were waiting for  him.

So today we are going to buy field fencing and metal posts in order to put in a properly fenced free-range area for them. Is that still considered "free-ranging" when they are actually fenced in?