January 13, 2019
Hopefully my husband won't take offense to the title of this blog article...but as newbie wannabe farmers, I figure we can't expect to do everything right the first time around. So when we set out to erect a field fence in order to give our chickens a nice outside play area...er, I mean chicken run...we shouldn't expect it would be perfectly straight.  Nor perfectly the right height. 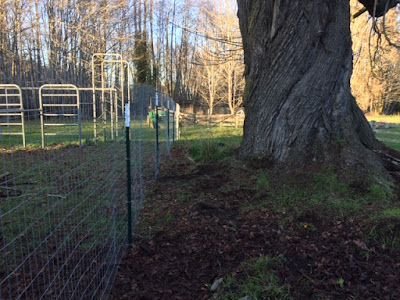 Our first challenge was the fact that they gave us steel T posts that were too short.  Of course, we realized this after we'd already pounded all of them into the ground and were starting to unroll the fencing. Duh. So...tip #1 for installing field fencing: Make sure that the posts are extra long. When they sell you 5-foot tall posts, you should realize they are not tall enough for 5-foot high fencing.  You need 6 foot -- or even better 7 foot -- tall T-posts in order to have enough height left over so that your fence doesn't look weird.

We were too tired to pull all the posts out of the ground and start over and of course we weren't going to put in shorter fencing (the birds could fly out, after all), and so we ended up buying more T-posts that were taller to put here and there in order to support the fencing better.  So what we now have is a fence with varying fence post heights. 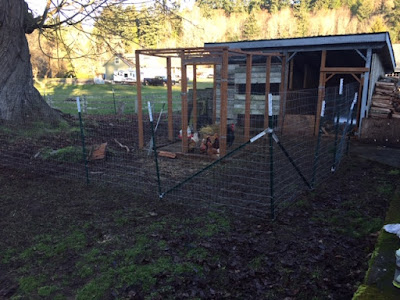 So then we realized the ground is kinda soft. It was pretty easy to push over a post.  That meant that once we started pulling the fencing to tighten it, the posts weren't going to stay up very well without bracing.  Which of course meant another trip to Coastal Farm & Ranch to buy more posts and bracing.  I had no idea that field fencing could be so expensive. Tip #2 for installing field fencing: consider how you will tighten and brace it before you begin.

Anyway, we got the fence half-way up this weekend, and despite its imperfections I am happy to see that my precious darling chickens will soon have their outdoor play area...er, I mean chicken run...so that they can enjoy foraging and roaming out in the sun like they are supposed to. So that leads me to tip #3 for installing field fencing: don't worry about it.  It's field fencing.  Nobody's field fence is perfect, right? 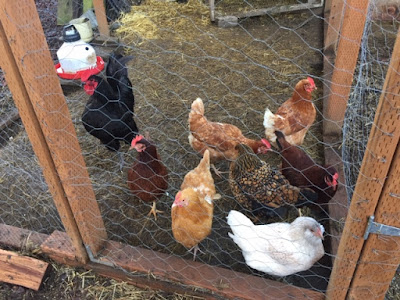 Most of our chickens are in one chicken coop -- our three originals and 5 other new chickens we purchased from Coastal last year.  Below are our latest two chickens, Cheech and Chong.  I have no idea which one is Cheech and which one is Chong, although whenever one of then gets into trouble, for some reason I refer to her as Chong. 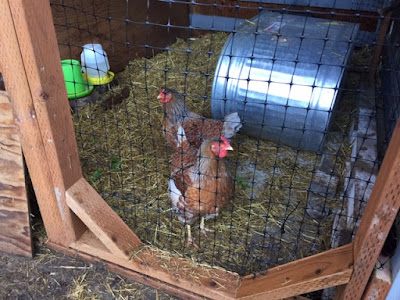 Cheech and Chong are the latest two that we adopted after our other chickens were grown.  The other chickens are still mean to these two, and so we have to keep them separated. Although, for some reason they seem to get along when they're outside foraging around.  They just don't like to be in the same coop.