January 04, 2018
It struck me today that I spend an awful lot of time thinking about and planning how to make better compost.  The first prime example: the other day, I made a DIY compost bin for my kitchen scraps.  I was super-excited about creating one myself. It was unbelievably easy, and saved me about $99 from having to buy one online.

All you need to make a compost bin is a big plastic tote bin (preferably a dark one) and a drill. 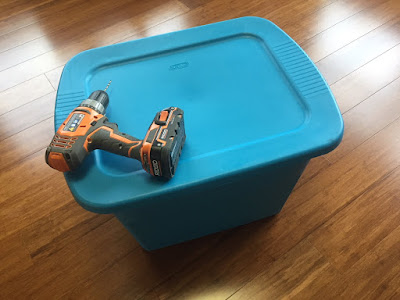 Simply drill holes across the top and bottom of the bin. The holes in the top are air vents and they also allow some moisture (such as rain) to enter; the holes in the bottom provide drainage. 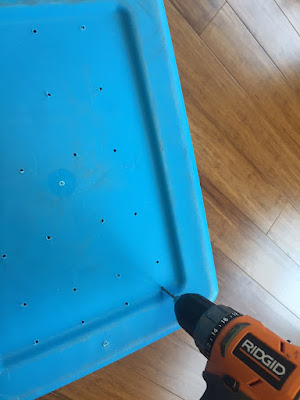 Then, begin filling your bin with layers of brown stuff (leaves, grass clippings, straw) and green stuff (kitchen scraps). If needed, add a little bit of water so that it retains the right level of moisture. 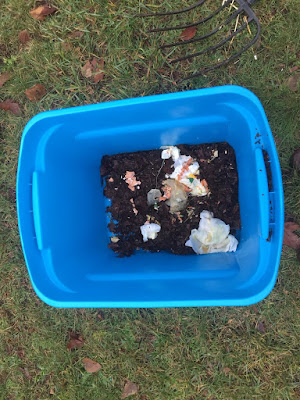 Another case in point that shows how insanely I behave over composting is my exuberance to begin using my chickens as compost-making machines. Chickens and compost seem to go hand-in-hand. 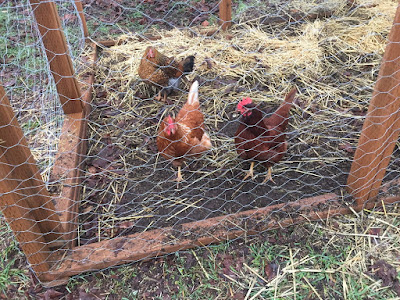 Here is my Chicken Compost Machine Recipe: Scatter in the bottom of your chickens' outdoor pen the following: 1 part straw, 1 part leaf mulch, 1 part kitchen scraps. You can do this repeatedly during the compost-making period.  Various pooping happens as they root through it, which adds even more richness to the compost.  Chickens love to root around in the interesting piles of organic matter, and as they do so, they are turning the compost for you.  Their excitement when you bring out the latest dish of kitchen scraps is rewarding to experience.  The turning they do eventually speeds the organic matter breaking down and, from what I understand, results in a rich and beautiful compost, possibly as soon as 2 weeks from when you started.  I'm still in the creation stage, and so I'll have to report back later on the results.  I'm pleased to report so far that my three hens are doing a magnificent job rooting around and pooping on the compost, and it's looking about as I would expect so far.

My neighbor, Brian, came by and mentioned to me that he has kitchen scraps he wouldn't mind contributing. He doesn't like throwing his scraps in the garbage, and he actually asked me if he could come over and dump them in my chicken pen.  It was all I could do to contain my excitement.  Instead, very nonchalantly, I agreed that would be fine, and I mentioned to him that there's a list of forbidden foods for chickens (the things that can make them sick); I'm preparing that list now to take over to him.

Due to the fact that chickens can't have everything that goes into the compost bowl, I must tell you, I also spend some time each day evaluating what is in the bowl and separating out what becomes their "treat" in the pen. Yes, I dig through garbage.

You may be wondering at this point: exactly why am I so excited about compost?  The answer to that is simple. Compost is a rich black gold for the garden. I've read that if you enrich your soil enough, you don't have to worry about bugs and fungus and other ailments plaguing your garden. Gardens with rich soil yield significantly more than those that have poor soil.

And so, on my kitchen counter is a big glass dish that all our daily scraps go into.  Throughout the day, I remind family members to separate out food scraps, coffee grounds, tea bags, banana peels, and the like, and put them into the bowl. Sometimes I look in the trash to make sure they complied with the rules (periodically, they have forgotten -- I am not too proud to correct their mistakes by scooping up the misplaced food debris and putting where it belongs). Later in the evening, with great pleasure, I skip outside to the compost bin, which I've placed conveniently by the garbage cans.  I drop the bowl's contents into the bin, and then grab the pitchfork. Into the yard I go to pitch up a small scoop of leaves from the mulch pile, to use for covering the kitchen scraps  (covering the scraps ensures that fruit flies and other pests don't swarm it). Occasionally, as I stir the contents with a garden shovel, I realize that I must look a little bit like a mad scientist experimenting with a new formula. Bwaahaahaahaa! This thought drifts through my mind, and I think I just may be a crazy compost lady. I'm hoping...perhaps this is a common malady among farm girls?