Hundreds of Bird Skeletons Found in the Chimney!

November 01, 2017
Brrrr...it's sure been cold lately, which means my family has been trying to figure out how to keep warm in this big old farmhouse. We decided to go ahead and manage the cost of installing a pellet stove in the living room fireplace, as our electric HVAC system has been running continuously and it's barely 60 degrees in the house. I'm not looking forward to receiving our next electric bill. So, I headed over to Thurman Supply, a local home improvement store, and picked out a quality pellet stove at a pretty good price.  The next step? Call the chimney sweep.

Scott from Fire Pro Chimney Sweeping came by today, and ended up here about twice as long as he had anticipated.  Our first clue there was an unusual situation to be dealt with was when the chimney flue damper handle broke off due to deep rust.  He had to use a crow bar to pry the flue open.

The flue was barely open when bird skeletons began to fall out, landing in the bottom of the fireplace. 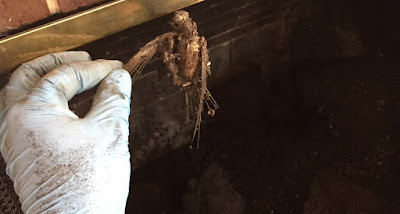 But the horror didn't end there.  We soon discovered that all kinds of decaying matter from birds had compacted the chimney so tightly that it was sealed closed.  Without any sort of opening to vent out the obnoxious odor, the smell that filled the living room soon overwhelmed us.  Dust masks were definitely in order.

Scott described the material consistency that he was digging out of the fireplace as similar to giant boulders.  It took considerable effort for him to scrape all the decaying bird matter out of the chimney.  He did most of the work from inside the house, reaching up into the chimney with his crowbar.

This was the most crud he had ever dug out of a chimney in all his years of doing this.  He was so impressed that he took a photo of the enormous pile that had built up inside the fireplace, to share with his colleagues.  You know it's bad when they're the ones taking photos... 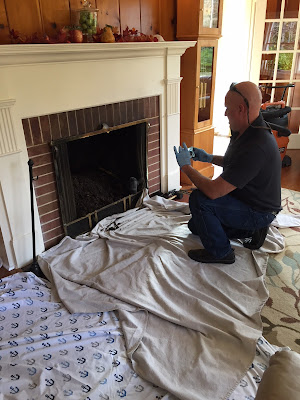 By the time he was finished, the bird-related mess filled 3 giant black garbage bags!  Scott did an excellent job and left the room spotless.

Before the chimney sweep left, my neighbor Brian came by and chatted briefly with him.  Brian had an interesting story to share.  Apparently, he used to watch huge swarms of chimney swift birds gather into a tornado above the house and dive bomb into the chimney.  This was back when the prior owners were here.  Well, now that the chimney is clean, images of birds diving all the way into our house suddenly filled my mind. 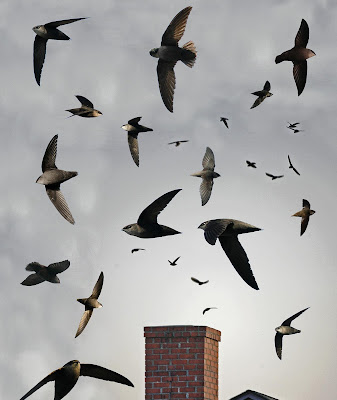 It will be a week before the chimney liner and cap are installed.  I really don't want to deal with birds flying around in the house.  Which is why there is now a piece of plywood over the top of the chimney with a rock on top to hold it down.

I'm looking forward to the pellet stove being here next week. Keep warm, everyone!