October 25, 2017
The community where I live shares a number of resources, among them being three big piles: compost, manure and mulch. The compost was just announced via Nextdoor to all our neighbors as being ready for the taking.  Since I'm new to the area, I was especially intrigued and went over to check it out. 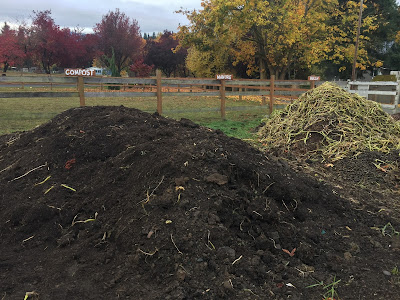 The compost and manure piles are quite large; the mulch not so much, but that will change as the fall season progresses.

There is a ready supply of manure all year long due to the community barn, thanks to the four horses and American Spotted Ass who live there.  (I love the loud Hee Haw that the ass makes whenever its owners show up. We can hear him all the way across the field where we live, since our house is near the barn.) A handful of community members are the owners of the animals and share responsibilities for their care.  The manure is scooped from the barn and field and carted over to the pile, where it cures all year long for use in everyone's gardens. 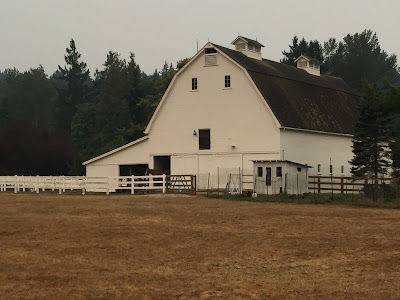 The compost comes primarily from the community garden, which is situated right next to the barn. Some of the garden waste is also thrown over the garden fence into the chicken coop, where the chickens go bonkers fighting over a wilted beet top or bug-eaten lettuce leaves.

Last spring someone planted a variety of squash in the compost pile.  By late summer, the pile was going gangbusters, and was overgrown with more squash than any one family could consume.  A couple weeks ago, the barn volunteers who have been managing the piles announced that the squash was picked and placed at the end of the driveway to the barn ("Come take some free squash!" they posted).  They also announced that the compost had been cleared off, turned and was ready for use.  I noticed that the vines from the squash were thrown over the manure. 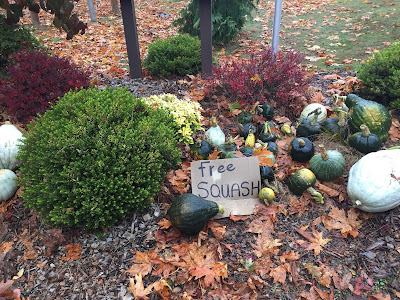 Money is tight until our house in the city is sold (we currently have 3 house loans, two for the house we moved out of, and one for the house here where we now live), and so I've been trying to be more frugal.  So you can imagine how delighted I was to learn about the free squash.  I've taken a few of them home to cook.  (I still don't have a stove in my kitchen -- we ripped out the broken stove and kitchen island when we were doing updates and still haven't finished that project.  We're going to wait until our other house sells to buy anymore big ticket items, which means I'm cooking from a crockpot and microwave for now, and any other small cooking gadgets I already have. It's been interesting!) 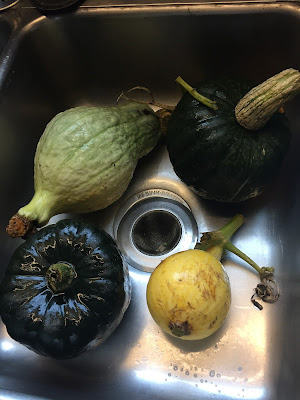 The squash pile is now dwindling, as neighbors take from it.  Someone broke a squash apart the other day and threw it in the community coop for the chickens to peck at.  I thought that was a good idea, so I grabbed one of the softer-looking ones that wasn't so good for eating and did the same for my three hens.  They loved it!

Leaves raked from the plum and apple trees that the community shares are dumped into the mulch pile. With the end of October approaching, the pile should soon start to grow substantially.

One of our other purchases pending our house sale is a tractor.  I'm looking forward to scooping up some of the black gold from those piles and putting it into my future garden.  Since I'm right next door, all I would have to do is drive the tractor over and then across my yard to my garden.  I'll be daydreaming about that for the next couple months, as I begin to plan the garden.