How to Remove Carpet Tacks From Hardword: Best Tools & Steps

September 29, 2017
When it was time to remove the carpet from our vintage house, I learned all about how to remove carpet tack strips from hardwood floors.  I thought I'd share the steps we used, as our goal was to not tear up the floors in the process since we planned to refinish them. 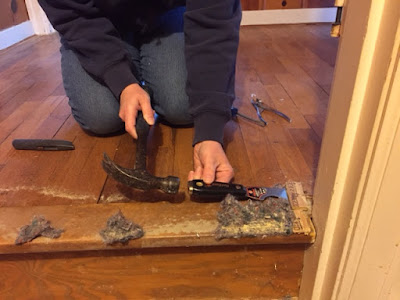 We hired two strong men to help us remove the old carpets upstairs in our house. It was among the best $200 I ever spent.  That's really hard labor, as I could see by how overheated and exhausted they were after the three hours they spent busting their butts getting that carpet out the door and into the dumpster. (And I should mention -- the previous owners had pets and there were many urine stains on the carpets -- we were so grateful to the workers who helped us get these nasty carpets out!) 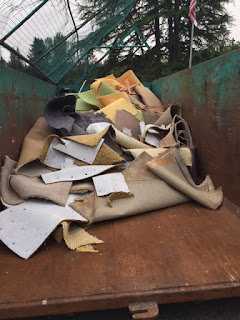 Once they were done, the next chore was a tedious one: remove carpet tack strips from the hardword floors.  We had a total of 1,000 square feet of wood floors that needed attention.  Four of the seven rooms upstairs had been carpeted, along with six closets, and all now had carpet tacks and staples to be dealt with.  It was a task I felt I could handle as it did not require significant upper body strength. 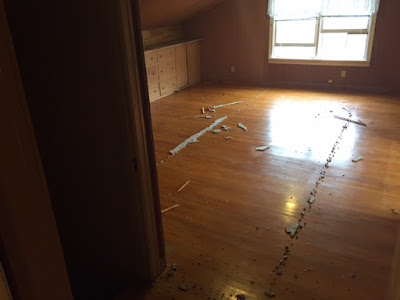 Since we intended to refinish the wood floors that were under the carpets, we needed to take care in how we remove carpet tack strips so as to minimize the damage to the floors.  I tried a number of tools from our tool bucket and settled into a rhythm using these: 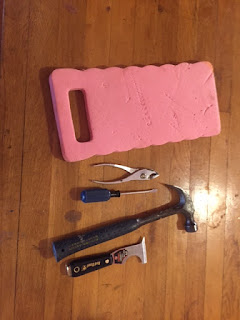 The scraper is a Red Devil Zip-A-Way 6 in 1 Painters Tool.  This tool was handy for quite a few situations around the house.  It's angled edges allowed me to wedge it under tacks that had close-set nails. I used a hammer to tap the scraper under the carpet tack strip, and then pulled up to break it loose.

Often the nails came out with the tack strip.  Then, any stray nails could easily be removed with the hammer. 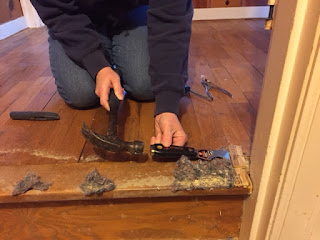 Next, I removed the staples from the floor with a flat screwdriver. 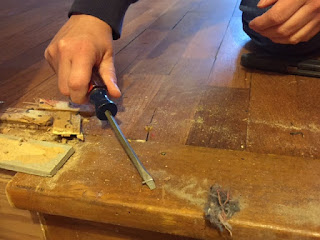 Sometimes the staple came immediately loose, and sometimes only one side would come up. An easy tug with the pliers removed any staples that were only partly loose. 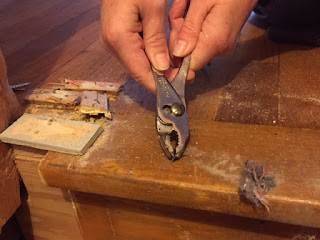 After a while, my knees were sore from scooting along the floor, and so my pink gardeners knee pad came in handy.

Cleaning up the mess was not so bad. Periodically, I stood to stretch, and then swept up the debris into a pile to see how much was left to do.  Big pieces could be picked up and placed into the large garbage bag. Then, the remaining pile was swept into a dustpan and into the bag it goes. 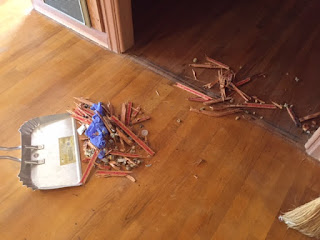 Gloves are essential when doing this type of work.  This is a dirty chore, and since we were working in a house that we had just bought, I was not sure what I'd encounter in the crevices under the carpet tacks. I was a bit shocked toward the end to come across a packet of something illegal, deep inside a dark closet.  The bag was carefully disposed. 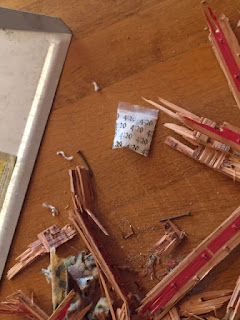 I also wore a respirator, as there was quite a bit of dust and fine particles, especially when sweeping up.

There are many other tools and methods for removing tacks.  A shovel is probably the fastest and easiest method, but it will scrape up the floor, which may not matter to you if you're removing tacks from a sub-floor and plan to lay down new carpet or wood. 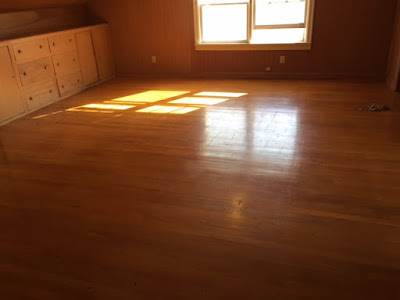 One other detail I should mention: the work involved when you remove carpet tacks can make you really sore come bedtime.  Ibuprofen and something for sore muscles is a good idea!